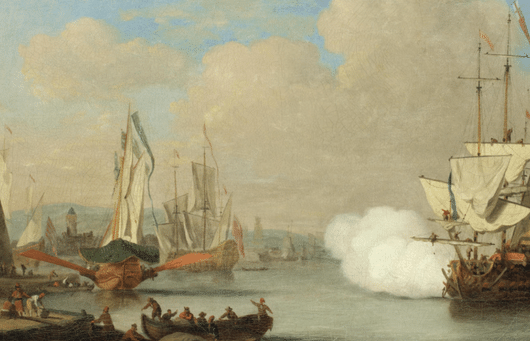 Bonhams is a British auction house and art business specialising in fine art and antiques which was founded in London in 1793. It is now a large global company with its locations including New York, San Francisco, Los Angeles, Hong Kong, Paris, Sydney and London. In addition to fine art and antiques it also now specialises in other fields such as jewellery, motorcars, wine and other types of collector markets. Bonhams holds many auctions and exhibitions and has approximately 400 annual sales throughout its 60 specialist departments. It has just held a large exhibition entitled Visions of the Great White South, which contained both photographs and watercolours. Bonhams initially aimed to challenge the market positions of Christie’s and Sotheby’s and it has indeed achieved this in multiple fields.

Bonhams’ marine art department is particularly eye-catching and their auction calendar has contained maritime paintings and works of art for over 30 years now. They boast traditional 19th-century seascape paintings, ship portraits, topographical views and also some modern contemporary works. They are market leaders in this field with record prices and multiple sales auctions. Back in January, Bonhams held a large sale in New York which featured a 120-gun model ship from 1841 and James Buttersworth’s oil painting of the Black Warrior.

Now Bonhams is holding their next marine sale on 5th October in Knightsbridge, London. Full information about this sale will be available online nearer to the event and Bonhams also offer a simple step-by-step guide on how to buy at their auctions. However a few lots for this auction have already been released online and they include a painting called An Old Time Cruiser by Thomas Somerscales, which is pictured below. Furthermore, there are two paintings by the British 20th-century maritime artist Montague Dawson which depict a galleon in a high sea and the American clipper Asterion.